The biggest mystery in climate science today may have begun, unbeknownst to anybody at the time, with a subtle weakening of the tropical trade winds blowing across the Pacific Ocean in late 1997. These winds normally push sun-baked water towards Indonesia. When they slackened, the warm water sloshed back towards South America, resulting in a spectacular example of a phenomenon known as El Niño. Average global temperatures hit a record high in 1998 — and then the warming stalled.

Ecologist Thomas Lovejoy tucks his trousers into his socks with a casual warning about chiggers and then hikes off into the Amazon jungle. Shaded by a tall canopy and dense with ferns and underbrush, the old-growth forest looks healthy, but Lovejoy knows better. Three decades ago, the surrounding forest was mowed down and torched as part of a research project, and the effects have spread like a cancer deep into the uncut area. Large trees have perished. The spider monkeys have moved out, as have the army-ant colonies, and many of the birds that depend on them. Joe Leader’s heart sank as he descended into the South Ferry subway station at the southern tip of Manhattan in New York. It was 8 p.m. on 29 October, and Hurricane Sandy had just made landfall some 150 kilometres south in New Jersey. As chief maintenance officer for the New York city subway system, Leader was out on patrol. He had hoped that the South Ferry station would be a refuge from the storm. Instead, he was greeted by wailing smoke alarms and the roar of gushing water. Three-quarters of the way down the final set of stairs, he pointed his flashlight into the darkness: seawater had already submerged the train platform and was rising a step every minute or two. 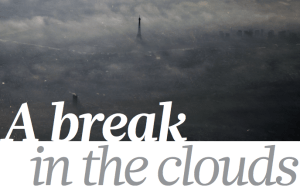 Seen from space, Earth can look dressed up or downright dowdy, depending on the location. In some spots, swathes of cloud cloak the dark ocean, offering a stunning contrast of hues. In others, power plants spew out plumes of grey haze and desert storms cover vast regions in palls of dust. Together, those clouds and the fine particles, which are known as aerosols, do more than just obscure the planet’s surface. By reflecting, absorbing and emitting radiation, they have a major role in setting Earth’s temperature and have proved maddeningly difficult to simulate in atmospheric models. For decades, they have been the biggest sources of uncertainty in forecasts of future climate. 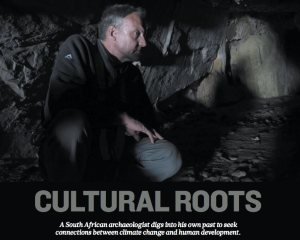 Metal scrapes on hard sand as archaeologist Chris Henshilwood shaves away the top layer of sediment in Blombos Cave. After just a few moments, the tip of his trowel unearths the humerus of a pint-sized tortoise that walked the Southern Cape of South Africa many millennia ago. Next come shells from local mussels and snails amid blackened soil and bits of charred wood, all remnants of an ancient feast. It was one of many enjoyed by a distinct group of early humans who visited Blombos Cave over the course of thousands of years. Bruce Babbitt ambles down a walkway flanked by manicured lawns, gleaming office trailers and tidy rows of housing. The drone of vehicles competes with Latin music playing softly in the distance. Only the occasional birdsong or glimpse of macaws serves to remind that this encampment is smack in the middle of the Peruvian Amazon. Babbitt looks into the distance, where the separation towers of a natural-gas facility rise above the trees and shimmer with industrial splendour in the evening sun. “It’s an amazing sight,” he says.

Mary Nichols can take some pride in the view as she travels out of Los Angeles. The San Gabriel Mountains rise up to the north, framed by blue sky with just a touch of midday haze. The clear vista comes in large part because of the California Air Resources Board (CARB), the agency that Nichols leads, which has spent decades cleaning up the city’s air. Now she and her team are setting their sights even higher — with an ambitious plan to cut California’s greenhouse-gas emissions. 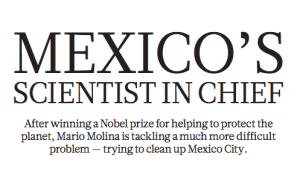 Cab drivers have heard of him. Political leaders seek his advice. Strangers often shake his hand in a mixture of congratulations and thanks. Such is the fame of Mario Molina, the 67-year-old chemist who has become something of a national icon in his hometown of Mexico City. Mateus Batistella used to be a vegetarian, but Brazilian cuisine has worn him down. At lunchtime, virtually all the restaurants offer a classic dish of thin-cut beef with salad, rice and beans, served with a cooked-flour dish called farofa. In cities and towns, traditional butchers and supermarkets alike sell every cut of beef imaginable. “It’s everywhere, and it’s cheap,” says Batistella, who heads a satellite-monitoring research centre in the southern city of Campinas for Embrapa, the research arm of Brazil’s agriculture ministry. “Today I eat beef all the time.

Last November, a catchy music video popped up on YouTube and attracted thousands of fans. Called ‘Hide the Decline’, the video featured a caricature of climate researcher Michael Mann admitting that he had committed fraud while creating his famous ‘hockey-stick’ graph of temperatures over the past millennium. Accompanied by a kitten playing the guitar, the cartoon image of Mann joyfully sings, “Making up data the old hard way, fudging the numbers day by day.” Greg Asner peers out an open window, taking stock of the jungle as the single-engine prop plane chugs over a pair of scarlet macaws gliding among the treetops 120 metres below. The Peruvian Amazon stretches in all directions, painted in countless shades of green, accented here and there by patches of purple, pink and yellow. Occasionally, naked white trunks rise amid the leaves, a reminder that even the rainforest has deciduous tendencies. 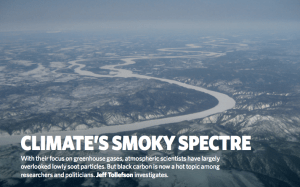 Steve Warren spent his spring break island-hopping with a couple of friends, but they didn’t go to bask in the sun. Instead, his team from the University of Washington in Seattle toured the Canadian Arctic, digging pits in the snow and collecting hundreds of samples to take back to the lab. The targets of their expedition, hidden in all the whiteness, were specks of something called black carbon. 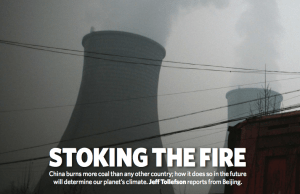 Huang Bin, a 30-year-old engineer, is surveying the scene at one of China’s showcase energy projects: a retrofit that will make the Gaobeidian coal-fired power plant in Beijing burn just a little bit cleaner. Three engineers in red hard hats pore over a blueprint, their fingers tracing lines on paper splayed across a steel tank. Two workers adjust a valve nearby, one of hundreds on a two-storey platform erected alongside two 30-metre-high vessels that will house the chemical reactions at the heart of the project. Sparks fly as welders connect pipes; the buzz of grinders comes and goes. The ground was broken on this project just three months ago, and even an outside observer can tell that there is plenty still to do. But no one seems to doubt that the world’s latest carbon-capture pilot plant will be finished in three weeks’ time. “Chinese speed,” Huang says with a smile.